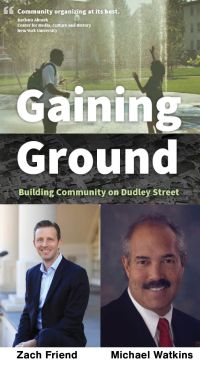 Join Michael Watkins and Zach Friend for a discussion about the film Gaining Ground: Building Community on Dudley Street (2012; 59 min), available on Kanopy, the library’s online video streaming service. It is not necessary to watch the film beforehand but if you’d like to check it out, follow this link. We invite people from all walks of life to come with questions and ideas to help us build a more resilient community.

Registering for this event is important! Registering sends a reminder email one day before the event containing the Zoom webinar link and the option to listen to the presentation just by calling a phone number.

This event is brought to you by The Friends of Santa Cruz Public Libraries.

Michael Watkins is a founding member and currently serves as President of the California Association of African American Superintendents and Administrators, a group of educational leaders committed to addressing critical issues in education as they relate to African American students in CA. In 2006, Michael was the first African-American elected as Santa Cruz County Superintendent of Schools, a position he held for 12 years.

About Gaining Ground:
In the midst of the economic meltdown, Gaining Ground explores the innovative, grassroots organizing efforts of the Dudley Street Neighborhood Initiative (DSNI) in Boston. DSNI was created 25 years ago when the community had been devastated by bank redlining, arson-for-profit and illegal dumping, and has become one of the preeminent models for community-based change. Over the course of two years, we watch a new generation of leaders working to prevent foreclosures and bring jobs and opportunities for young people to one of the city's most diverse and economically challenged neighborhoods.

To view the film, visit the library’s Kanopy page at santacruzpl.kanopy.com.

Kanopy provides access to one of the most unique collections of films in the world – including award-winning documentaries, training films and theatrical releases – on every topic imaginable. Users can view 8 films per month with their account. Mobile apps and a Roku channel are available.